How Do You See High Spenders? 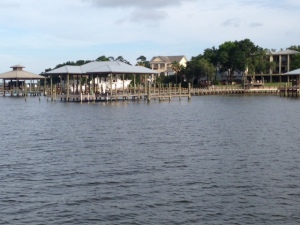 We had an interesting discussion today at breakfast.  My daughter was talking about one of her friends who was “really rich.”  She talked about how her father was a heart surgeon, that they lived in a big house, and how she was always bringing new things to school.  These are the types of things that people normally see and think that a family must be wealthy.

I wondered aloud, however, how wealthy they really were.  I told my daughter that sometimes people have a big income, and therefore spend a lot of money, but that really they aren’t that far away from a foreclosure should their income stop.  No one would see our lifestyle and think that we were wealthy.  We have a sufficient, but modest home in an average subdivision.  The place where we live is a neighborhood where many families buy their first home, then move away in a few years to one of the trendier subdivisions.  We’re therefore among the longest term residents of the subdivision.

We drive older cars – my Jeep Cherokee is approaching 20 years, but I don’t plan to get rid of it just because I like it so much and it would be hard to find one with similar reliability and ruggedness with all of the bells and whistles on today’s cars.  My wife’s car was about five years old when we bought it in 2008.  This year we’ll upgrade her to a 2014 Avalon or 2016 Camry.  This will be the most we’ve paid for a car since we bought the Jeep.  We’ve found that you can get a lot more car for a lot less each year by letting someone else take the depreciation hit, so we’re buying slightly used instead of new.  We realize that we’d be in the same position in a year or two if we bought a new car, but that we’d be $7,000 poorer.  There are a lot of other things we’d like to spend $7000 on.

But looks can be deceiving.  We’ve already saved up enough in our retirement accounts that we should have no issue funding our retirement.  We have also saved up a lot for our children’s college education.  In some ways that almost seems foolish, given that it seems like schools just take your money if you save by charging you more than other families who haven’t saved because they’ve blown their money on gadgets and stuff.  Still, a lot of families have their children coming out of college with lots of student debt.  I don’t think our children will need to worry about that unless they decide to go to an elite private school, which I doubt they will since they see that the value they receive at such a school is generally not worth the cost.

I’ve actually changed the way I see big spending individuals.  When I see someone with a fancy new car or designer clothes, I wonder how far away they are from the financial cliff.  I actually feel some pity for them.  If they lost their job today, how long would it be before that car got repossessed or the mortgage company started calling?  If they had a financial emergency like a broken leg or an air conditioner failure, would they have the cash to get them through or would they be taking out a loan?

I’ve found what to look for when I want to find people who are probably actually wealthy, in that they have a lot of money, as opposed to people who just make a lot, and then borrow and spend even more.  I look of the guy driving the older car despite having a decent paying job.  I look for the people in the older, modest homes but who have some nice features inside.  In general I just look for the people who don’t seem to be concerned about money or displaying wealth.

One thing my son asked is why it was useful to have money if you don’t use it?  Wouldn’t it be better to spend a lot more and enjoy it?  I tried to explain that having some wealth set aside provides something a new car or fancy clothes can’t – security.  It takes a lot of stress off when things happen because we have the resources needed to take care of things without going into debt.  We’re also getting to the point where we can start using some of the income generated by our wealth to add to our income from work.  We just started being able to do things like take special vacations each year or two like cruises because of the income generated.  As time passes, that income will grow and we’ll be able to do even more.

I’ve also found that I just don’t want to spend much money the way that some people do.  I really don’t want to overspend for clothing to impress other people.  I really don’t want a shiny new car that I need to worry about getting dinged in the parking lot.  And I generally feel sad for the people I see walking around with their pathetic paper cups who overpay for coffee every day.  In general I find Starbucks coffee to just taste burnt.  We have bought a modest piece of wooded land to use for hiking and camping, and maybe we’ll put a cabin on it as a retreat/vacation home someday.  The land is an investment of sorts, but also I don’t mind spending money for nicer things that are a good value.  It is just spending money where the value received doesn’t match the cost that bothers me.

So what do you think when you see someone with a new car or fancy clothes?  What about the guy at the office who always has the latest gadget or the woman who always wears the hottest styles and always has her nails done?  Do you feel envy and a desire to have what they have, or do you feel some degree of pity?  Do you think that they are wealthy, or maybe spending all of the money they have and then running up the credit cards and the home equity loan to get still more?  Do you wonder where they’ll be at retirement?  Do you wonder how much debt their children will have coming out of college?  Most importantly, are you going to follow their path, or blaze your own trail?