This is the last post in a series on fundamental principles to keep in mind when managing your 401k or IRA account.  I call these the Three keys to retirement investing.    These are:

Like many people, you may be eager to retire early, which may also mean tapping into your 401k or IRA in your early sixties.  Unfortunately, this can also mean giving up on a lot of additional income since it is the later years when you really start making a return from your investments. Delaying withdrawals by working a couple of extra years or saving up money outside of your retirement funds can make a big difference.  This is because of the high returns you get at the end.  To see this, let’s look at the difference between two individuals.  The first is contributing $12,000 into a 401k plan starting this year, and the other has $5 M already built up in her 401k plan and is contributing the same $12,000 per year.  Let’s assume that both are getting a 12% annual return during each of the five years we examine.  (Note, this is totally unrealistic, but this assumption is useful to illustrate the point.  We’ll come back around and discuss actual probable returns in a moment.) 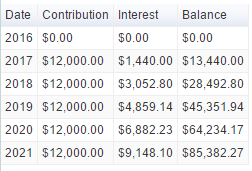 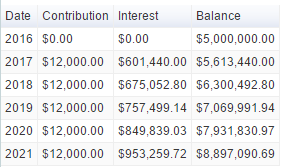 When you first start a 401k, it will seem like nothing is happening.  The returns you get from your investments will be very small compared to how much you’re contributing.  At some point, however, the account will grow to a large enough amount that suddenly the five to twenty percent returns you get during a given year are much bigger than your contributions.  This usually happens fairly suddenly.  Once it does, it is usually fairly amazing how big the returns are during a given year in terms of actual dollar amounts.

If you start to take the money out in large amounts, you start cutting back on the size of your portfolio, causing your investment returns to decline. You don’t only spend the money you pull out – you also lose the investment return that money would have generated in future years.  In general, you can withdraw about 3-4% of your account value per year with only a small chance of causing the account value to decline over time since your investments in general (assuming you’re in a mix of stocks and bonds) will normally be able to replace the money you’re withdrawing at those withdrawal rates.

A look at investment returns

Now, let’s look at those returns.  While assuming a simple, 12% return each year is good for illustration, there is nowhere you can currently get a steady 12% return without taking significant risks.  If you could, it would mean that inflation was at 10-15% per year as well, so you effective rate of return might actually be negative.

Really, the greatest return you could get with a reasonable amount of risk and a somewhat predictable return would be through investing in a diversified set of high-quality bonds, which would pay around 4-6% at the current time.   This would still be a respectable $20,000 – $30,000 per year in investment returns, but not the $75,000 shown.  Even there you could see your portfolio decline in value if interest rates increased, although you would recoup that money if you held the fund long enough for the bonds you owned to be redeemed and/or interest rates to decline again.

If you were investing in stocks, you would see better returns, but not predictable returns.  Even though the average return for a diversified stock portfolio has been around 12% per year, during a given one year period you could see returns of plus or minus 30% or more.  Instead of seeing steady, reliable returns as in our example, you would actually see unpredictable returns, both positive and negative.  You might gain $250,000 one year, then lose $100,000 the next.  There would also be years when the portfolio value doesn’t change much at all.  There are also exceptional years like 2000 and 2008 where you could see declines of 40% or even 50%.  This means your $5 M portfolio would be worth $2.5 M at the end of the year. Thankfully, these types of significant declines are rare, and they are often followed by years with large gains, but you must still take this into consideration when investing near the time when you’ll need the money.

To guard against a retirement – destroying disaster, while still giving yourself the chance for good returns, consider the following:

Got an investing question? Please send it to vtsioriginal@yahoo.com or leave in a comment.

Error: Twitter did not respond. Please wait a few minutes and refresh this page.