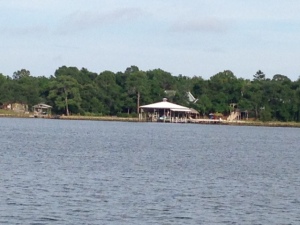 I had a long car trip, so I did as I frequently do on long trips and rented a book on CD from Cracker Barrel.  They have a system where you can rent at one location, then return the book to any location along the way.  I picture CDs crossing the country a little at a time.  Actually, since some of the books are 12 hours long or more, maybe they move rather rapidly.

This time I rented Playing with Fire, which turned out to be historical fiction about a Jewish family living in Italy who were sent to the death camps in Poland.  One brother, who played the violin, ended up being pressed into service playing in a small orchestra at a death camp in Northern Italy. The Commandant had the group play music all day long to drown out the noise from the executions and the screams coming from the crematorium from those who were not quite dead before being thrown into the ovens.  In the end, the members of the orchestra were killed and fed to the ovens as well before the Nazis fled to avoid capture.

While the characters were fictional, the book portrays real events that happened in Italy during 1942-1947.  Italy saw about 20% of the population of Jews killed during WW II.  In Germany and Poland, it was about 90%.  Of course everyone has heard about the horrors of that time and calling someone a Nazi is just about the worst thing you could call them.  And yet we fail to learn the lessons.

This has happened other times, although perhaps to different degrees.  In Russia, millions were killed by Stalin and other Soviet leaders after the violent Bolshevik revolution.  In Cambodia, the educated and literate were marched into the jungles and slaughtered.  I have no doubt that Hugo Chavez killed many of the farmers who refused to give up their land in Venezuela during the more recent take-over.  In all of these cases, while the Right is usually blamed for fascism, this was done by Socialists (note, the Nazis were the Socialist party in Germany).  Socialists who employ envy as a means to bring them to power and justify their actions.  Indeed, in Vietnam and North Korea the same thing has been done, although many times starvation has been used as the means of execution rather than a bullet or club.

Often when these events happen, people wonder how decent people could stand by and allow such brutality to happen.  And yet we see the stirrings of exactly the same thing in the United States today as we saw in Germany.  The speakers may be different, but the themes from Sanders, Warren, and others are the same.  In Germany Hitler vilified the Jews and convinced the population that they were the source of their problems.  Because the Jewish people have a culture of forming businesses and serving others, many of the shop owners, bankers, and business owners were Jewish.  They were also prominent as professors, engineers, and lawyers.  Because the Jews “controlled the means of production,” to borrow a phrase from Karl Marx, the Nazis were able to convince many of the other German citizens that their lives were miserable because the Jews were oppressing them, and that they should therefore take from the Jews and eventually kill them.  Hitler used envy to stir the population and turn them against their Jewish neighbors.  This envy turned to violence, as seen by the formation of the black shirts who would go and victimize the Jews even before the Nazis started marching them to the gas chambers.

Today we hear Bernie Sanders stoking the same envy when he talks about rich Wall Street bankers being the source of the troubles of the middle and lower class.  We also see race baiting by the President and others, causing blacks to turn against the police and whites in general.  Often envy turns to hate and violence.  We are also starting to see violence, including the execution of policemen, attacks on people at Donald Trump rallies, and riots in the street.    While some would have you believe these are just spontaneous protests and riots, these are actually planned events being lead by Socialists and anarchist groups who want to bring down the fabric of civil society and replace it with fascism and a culture in which the strong victimize the weak.  We could very well see another holocaust in the US, this time the target being Christians, whites, conservatives, or producers and business owners in general.

Even many of the “non-violent” protests show force being used by the Left as a tool to gain their goal.  While activities like blocking the road or breaking into a building may not be violent, they are using force to take things away from others, even it is their time.  No doubt these types of actions will lead to violence as tempers flare.

It is time for people to see this manipulation of people using envy for what it really is.  Envy goes beyond wanting what someone else has.  It is a belief that they should not have whatever it is, and it (and they) should therefore be destroyed.  It leads to the gas chambers in Poland and the killing fields in Cambodia.  It leads to unspeakable acts to which normally caring people turn a blind-eye.

Socialism is fundamentally evil.  It is founded upon the fundamentally evil idea that it is right to take what is not earned from another.  Evil only leads to pain and misery.  We have a unique capability in America to pull ourselves up by spending our time tending to the needs of others through our work and making fair trades for goods and services.  We need to choose another path than envy.

We need to call out this evil for what it is.  We need to talk about what has happened other times people who have turned neighbor against neighbor using envy have been allowed to rise to power.  We need to talk about our common humanity.   We need to show that people do not become wealthy in the US by victimizing others, but by serving them.  This path is open to all and leads to wealth and happiness.  I already see the black shirts coming out of the shadows to lay their abuse on others.  Are we going to turn away?

Got an investing question? Please send it to vtsioriginal@yahoo.com or leave in a comment.