How Much of Your Retirement Savings Should Be Invested in Large Caps? 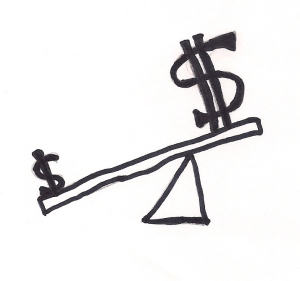 With the demise of traditional pension plans, many individuals are finding themselves needing to be more involved in their retirement planning.  Whether many people feel like it or not, a 401K plan is actually superior to a traditional pension plan because one can get much better returns, all of the money is available when one is ready to retire, your retirement future doesn’t rely on the future fortunes of the company for which you work, it enables people to change jobs without worrying about loss of retirement benefits, and it allows companies and public entities to better manage their finances and avoid making promises that will be difficult to keep in the future.

Large caps are safer than small caps and mid caps for several reasons:

2.  They tend to be international, meaning that they are not as affected by a slowdown in the US as a purely domestic company would.  You should also buy some international mutual funds, but you do get international exposure by buying Coca-Cola and Intel.

3.  They tend to generate a lot of cash from their operations, meaning they have the money to take advantage of opportunities.  If they want to enter a market, they do so.  If they need to do research and development, they can.

4.  They are able to pay dividends, which provides the investor with an income during stagnant markets and reduces losses during down markets.

With that safety, however, comes a sacrifice in your possible returns.  For one reason, because they are safer they tend to be valued  higher relative to prospective future earnings.  People pay more for the shares because they know they are likely to get a reliable return.  This means you return over long periods of time will be less in large caps than it will be in small caps.

There is also just the aspect of size.  An investor looking for capital gains is less likely to get a 100% gain, let alone a 1000% gain or a “ten-bagger” by selecting a large cap than he is by selecting a small cap.  Because the share price tends to track earnings, earnings need to double for the share price to double.  It is a lot easier for a company that is make $1 Million in sales each year to double its earnings than one making $1 Billion.

For these reasons, the percentage of large caps in your portfolio should be based on your need for growth and your tolerance for risk.  Someone who is twenty years old might choose to put nothing into large caps for the first few years since he won’t need the money for fifty years and has little to lose.  He really needs growth.  Someone who is fifty-five, however, should favor large caps over small caps since the day when he’ll need to start using his 401k for life expenses is rapidly approaching.  In general, it is good to have some exposure to all areas of the markets, but the amount of exposure should vary based on your stage in life.

Those goosed-up returns from a portfolio consisting only of small caps will also come with a lot of turbulence.  You might make a 20% annualized return over a period instead of a 12% return, but there may be some years with 30% or 40% drops in value along the way.  Spreading the money out definitely helps reduce volatility and generally doesn’t hurt your returns very much, especially when looking at the reduction in risk.

So I would probably start out in a career right out of school heavily weighted towards small caps and mid caps, but be moving some money into large caps as the portfolio value built up.  I might therefore do something like this with the stock portion of my 401k:

These are just rough guidelines.  The point is that one needs to shift into safer investments, like large caps, as one gets nearer to retirement.  Looking at the larger picture, the most important thing is to invest regularly and leave the money alone so that it will be there when you are ready to retire.  Anyone who is putting money away regularly and who resists the urge to cash out their 401k on some lark will be far better off than those who wait until their late forties or fifties to get serious about retirement.

Disclaimer: This blog is not meant to give financial planning advice, it gives information on a specific investment strategy and picking stocks. It is not a solicitation to buy or sell stocks or any security. Financial planning advice should be sought from a certified financial planner, which the author is not. All investments involve risk and the reader as urged to consider risks carefully and seek the advice of experts if needed before investing.